In 2010 Mike was a member of the first ever crew of 6 to row an ocean.  The crew on board the 11m long ‘Sara G’ably skipper by Englishman Matt Craughwell successfully crossed over 3,000 miles of Atlantic Ocean from Africa to the Carribean. 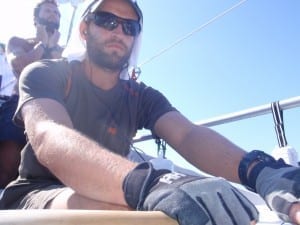 Mike on the oars, in the background James is relaxing on his off-shift

The crew set off from the Moroccan port of Agadir in early January expecting to cross in a little over 6 weeks.  Carrying all their own provisions and generating electricity from wind and sun they were entirely self sufficient and for much of the journey were well outside of the range of rescue services. 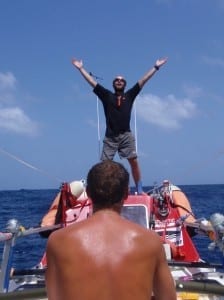 First sight of land after 57 days of rowing

The journey was not all plain sailing and issues with electrical equipment, the water maker and a 5 day long storm all tested the crew in different ways.  The band of strangers however gelled well as a team and after 57 Days and 20 hours they arrived safely in Barbados where they were once again reunited with waiting family and friends.

This was the first expedition undertaken by World Ocean rowing and the full crew consisted of, Matt Craughwell (UK), Peter Williams (IRE), Pedro Cunha (SWE/POR), Mylene Paquette (CAN), James Kenworthy (UK) and Mike Jones (IRE).  On completion of the journey Peter and Mike became the 7th and 8th Irish men to row an ocean.  The crew were also awarded a Guinness World Record as the first crew of 6 to ever row an Ocean.