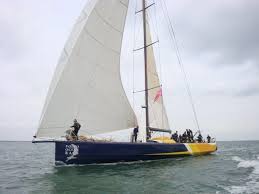 A short bus ride from the airport bought the crew to Ocean village, the Southamton home of Monster Project.  We received a friendly welcome from the full time crew who had just completed a busy day of work, fine tuning the machine for the 400 mile trip back to Greystones.

Stepping aboard was quite surreal and as I clambered around the belly of the Monster the reality slowly sank in, I was going to spend the next 10 days aboard this formula one racing machine, a privilge normally only afforded to a handfull of the worlds best ocean racing sailors.  Climbing back onto the deck the magnitude of of challenge grew clearer, not only would we have to learn to work as a team, we would each have to learn a range of skils to allow us to safely complete complex sailing maneuvers.

A full tour of the boat from bow to stern highlighted the complexity of each role and the many hazards and dangers which the power and scale of a Volvo open 70 carries.  A misplaced hand or a lapse in concentration can be devastating as ropes carrying loads exceeding 5 tons are common place and must be handled with extreme caution.

To sail around the clock around ireland our crew had to be divided I go 2 watches each with a watch captain.  Within each watch each of the roles had to be deldgated, my role would be operating the Primary winches, the largest winches onboard which control the hoisting and trimming (adjusting) of the sails.  It is not the most rock and roll job onboard, this is reserved for the bow men who live at the pointy end surrounded by waves as they crash across the deck, none the less I was looking forward to learning the skills required for my new role.

It was not until we approached the Solent on our delivery journey back to Greystones that the physical challenge of my role became apparent.   The carbon fiber primary winches are capable of carrying massive losds and are operated through upright pedastil grinders, essentially a hand bicycle which has a range of gears and can be operated in pairs.   The initial sprint to hoist the half ton mainsail up the 100 foot mast was halted by a snag in the rig resulting in lowering the sail to start again, an unwelcome result for my burning arms and shoulders.   Once the mainsail was hoisted a brief repreive followed before we were back on the grinders to hoist a headsail, lighter a sighly easier but with fatigued shoulders it felt endless.

With sails hoisted it was time to settle into the watch shifts and what followed was a light wind and at times painstaking 3 day journey home to Ireland.  We finally arrived into Greystones at 0300 on Thursday morning feeling tired but much more at home with the Monster.

We have now bonded as a team and learned some of the crucial steps involved in making this racing machine move.  Now the challenge will be to put our skills and teamwork to the test and see if we can be serious contenders to the line honours challenge in the 2014 Round Ireland Yacht Race.

To find out more about ourteam go to www.linehonoursireland.com