Being awakened by rain on the tent is one thing, being awakened by rain on you face is an entirely other.  But that is the joy of bivvying, at about 04:30 I woke to drops of rain on my face and slid deep into my sleeping bag sealing the bivvy bag over my head with a small air hole to breath and keeping the rain off my face. An hour later I had a soggy sleeping bag under my head and a wet face, it was time to move.  I climbed from the bag climbed into my paddling kit to avoid being thoroughly soaked and packed up.

I returned to find the boat as I had left it but now 4 metres of tide had dropped and it was a much bigger climb back down to the water.  With the wind still howling through the channel I had time to wait anyway so I wandered the Island chatted to some concerned fishermen, offered me a tow back to the mainland, and spotted some seals for a few hours.  The tide was finally high enough and I made my way down the rocks and back into the boat and off to Donegal. 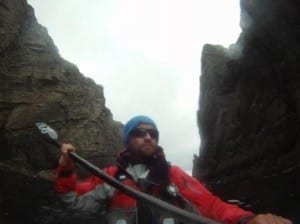 The wind had eased off so I crossed the sound and made my way around the next headland with Rossbeg my next stop.  This section of coastline is as spectacular as any I had seen so far with massive sea cliffs and sea stacks stretching for miles.  I had to negotiate some violent cross winds which blasted from the valleys as I passed threatening to tear the paddles from my hands.

Rain moved in as I rounded the final headland for Rossbeg and I used my compass to confirm my course and with a gentle tailwind crossed the bay to the small harbour.  With shallow reefs protecting this sleepy holiday village I went cautiously over the final few hundred metres before settling on a landing site and campsite.

An early finish was exactly what I needed and I hauled and dragged my kit and boat up the sand to a flat patch of grass near some disused boat trailers.  The trailers made a great clothes line and I hung our all my wet kit to dry in the fresh breeze and as the sun had finally appeared I pulled out my Goal Zero solar panels to recharge some batteries.

Still feeling the effects of the big effort across Donegal bay I had a double dinner, which filled me to bursting point. I was about to retire when I discovered the local pub, I needed to charge my camera so I wandered up for a drink and some electricity.  Turned out the owner, Joe has a cousin form Killaloe who I know, small world.  We chatted for a while about his hand made soap business, my adventures and triathlon before I retired to my tent to get set for an early start; I needed to rest my weary bones.

It was another low tide start so I dragged the boat to the water line and loaded up setting off into great conditions.  As the day went on I could feel my motivation and energy wane and as they did the pain in my right wrist grew.  This is a common problem for kayakers and in particular in the right wrist as this is the hand which control the rotation of the paddle from side to side.  I had a solution to this so with a short pit stop on Owey Island I changed to my super light AT paddles which have a special bent shaft and takes the pressure off the wrist.

With some relief I weighed up my options to get around Bloody Foreland with my final destination for the day Magheroarty a few miles round the corner.  I decided a straight line was on so I planned to pass outside the islands and shorten the distance as much as possible.  As I closed in on Gola Island I began to feel weary and the pain in my wrist began to return, a shorter day may be on the cards and my plan B of Bunaniver would have to be employed.

As I rounded Gola I was greeted by the Bunbeg Coast Guard RIB who had come out to check up on me and offer some support and assistance if required.  They followed me for a while as we chatted and then they led me through the maze of islands to the sheltered fishing port of Bunaniver.

In the pouring rain I made contact with Paddy Sweeny my host for the night and wished farewell to the Bunbeg crew.  Paddy drove down to pick me up a short while later and with a tired body we loaded the boat on his car to return to a hot meal and shower.  On loading the boat we noticed I had managed to wear the entire gel coat off the keel of the boat exposing the carbon/Kevlar weave.

4 weeks of dragging the boat around the beaches of Ireland had taken its toll, on the boat and me.  A well earned feed some kayaking chat and a comfortable bed was badly needed.  Many thanks to Paddy and his wife for the amazing hospitality, hopefully I will see you on the water some time guys.

As a final note and another coincidence Paddy now owns a boat which he bought from Jon Hynes, who met up with me on my first and second nights, seems like a long time ago, it is a small world!

← Over the top
Cutting corners →