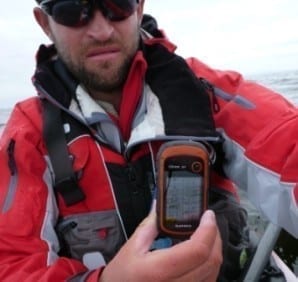 My college education was pretty varied and among the things we studied we learned about theories of learning and philosophies of adventure, some of which I remember.   One particular concept which has always remained with me is that of the states of Play, Adventure and Misadventure.

It is a simple enough idea which works as follows, you learn a new skill and enjoy doing it, for example let’s take kayaking.  A few lessons on a lake with an Instructor and you get comfortable and you reach a state of play, working within your comfort zone.  But you want more challenge so you enter the Adventure zone, this is where we learn most and to continue the example this would be trying out river kayaking with an instructor.  The next step is where most epic days and tragedies occur and that is Miss-Adventure, this would be getting on a river without an instructor, a bridge too far for a novice kayaker and could lead to disaster.

The line which separates Adventure and Miss-Adventure is at times very fine and I have on many occasions flirted on rivers and mountains with Miss-Adventure and have my fair share of epic tales as a result.  Today was a day on which I knew I would walk that fine line yet again and perhaps it was this feeling of being on the edge that nudged me towards my final decision.

Ever since I started planning this trip and drawing lines on maps to outline a route I had seen Donegal Bay as a crux point where a major decision would have to be made, 2 or 3 days around or 1 day across.  I had also said openly that the 1 day option could only be attempted in ideal conditions.

As with many epic days the problems start well before things turn nasty, but I was well prepared and equipped for most scenarios and so far my gut feeling had been the right one.  This time however other factors were at play and my judgement was perhaps a little clouded.

To fully understand the day we will start at the start.  Shortly after midnight I feel asleep on the pier at Belderg, alarm set for 05:30 to make sure I could get away early.

01:28 a van pulls up on the pier outside my tent.  The pier in Belderg is very remote with no phone coverage so to say I was a little nervous would be an understatement.  My fear only grew as I heard at least 2 people exit the vehicle shaking a can of spray paint, noticeable by the unmistakable rattle.  A short stint of spray painting later I lay nervously in my tent unaware of who or how many people were outside and what were their intentions.  After what felt like hours they went on their way and I fell back to sleep. 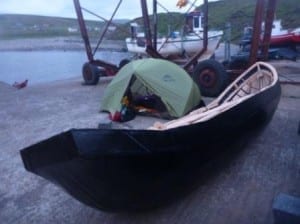 Camping on the pier in Belgerg

05:30 the alarm rings and resisting the urge to roll over I crawl from my sleeping bag and begin the early routine of packing.  It was at this stage that I spotted the clever artwork across the pier wall.  It had been some disgruntled locals who were clearly anti Shell and had sprayed “Shell Beggers” across the wall.  To briefly explain Shell have been building a major gas processing plant in this area for the past few years and some of the locals have been protesting the facility.

06:50 All packed up I moved out into flat calm seas and a light breeze.  Once clear of the pier I tried to get a forecast again on my phone, I had the sea area forecast from Met Eireann but I always got a Windguru forecast each day to compare the 2 and give a better picture, the signal was not good enough so I had a to settle for the Met forecast only, the first time on the trip I have done this.

I decided that I would move on the bearing for Malin Beg for 4 hours and if I averaged at least 2.5knts I would be on for the crossing and with more favourable winds promised for later in the day and the tide to be in my favour in the evening I would be set for a 12-14 hour crossing.  If I did not make the target speed I would I could easily move east for Easky and take the long way around.

By 11:00 I had made just over 9 miles and had an average of 2.3knts, thinking this would be sufficient and faced with fair conditions I made the decision to go for it.  Up until this point I had also been feeling very sleepy, the side effects of only 4 hours sleep, perhaps this effected my judgement.

Once I committed, that was it, I picked out the dull shadow of Slieve League on the distance horizon and put my head down.  Hour after hour passed and the light head wind remained creating a small chop on the water which would occasionally kill the boats momentum, but all the time I was holding close to 2.5knts so not too worried; although a tail wind would have been nice.

The breeze then began to freshen and the weight on the paddles increased but still I was making steady progress.  The head wind did now mean that each time I stopped I would go quickly backwards, so breaks were kept to a minimum and eating was done through a technique of holding a bar between my lips as I would bite off chunks and chew them, slowly devouring the whole thing without my hands, I got pretty good at it too.

16:03 the new forecast was issued and the situation had changed, the south-westerly winds (tailwinds) that were due in the evening were no more and to be replaced my south-easterly winds force 4-5, not so bad, cross winds I can normally live with.

By this stage I was oblivious to the fact that the tracker batteries had died and it was no longer transmitting my position, the last position it sent showed me mid way across Donegal bay, the furthest I had been offshore all trip.

At around 20:00 the wind changed unexpectedly and what had been very light and pretty good conditions turned to choppy bumpy seas and fresh northerly wind blew down the Donegal coast slowing my speed and forcing me yet again to up the effort to hold a mere 2knts and stay on target.

Up until this stage I was looking good to make land for about 22:30 and I decided that as soon as I got a break in the wind I would call Malin Head Coast Guard and let them know I was likely to be a little late but I was safe and well.  This was not something I had done up until now but for some reason I thought I needed to do it, strange when you consider how things unfolded.

That break never came and as eh wind swung from Northerly back around to the South East and unexpected local anomaly kicked in.  The 600m high cliffs of Slieve League began to deflect concentrate the winds directly into my path forcing me to paddle hard over a growing chop in fading light with no let up to make the call to the Coast Guard I ploughed on.  As I neared land and the Lighthouse on the Island of Raithlin O’Birne came into focus I decided once I get some shelter form the Island I would make the call, the sun was now closing rapidly on the horizon behind me and along with it the temperature was beginning to fall.

22:30 “Sea Kayaker Mike Jones, Mike Jones, Mike Jones, this is Malin Head Coast Guard Radio Over” Oh Shit was my initial thought as I scrambled to get the VHF Radio from my pocket wile still maintaining control of the boat, I responded to the call eventually and established they had called to check up on me as the tracker had failed earlier in the day.  At this stage I was 3 miles West of Malin Beg and expected to land by midnight.  After a brief conversation and with my heart rate elevated I started and adrenaline spiked sprint for Raithlin O’Birne.  The breeze however would not co-operate and within minutes I hit a breaking wave head on and it crashed over my head, water gushed down my spine soaking me, no time for self pity I fought on desperately seeking the shelter of the Island so I could call home and let everybody know I was Ok, ish!

23:30 a full hour after my chat on the VHF I finally began to get some relief from the wind and the seas flattened as I closed the gap on the Island.  At this point I decided that Malin Beg would be too far for tonight and I needed to find a landing site on the Island and make camp.

Wind the sun now set and the light fading fast I did not have much time to find a landing site and on the storm beaten Atlantic side of an offshore island there are not too many sandy beaches to slide in a kayak.  As I scoured the rocky shoreline I spotted a shadow and some still water, paddling through a small gap I entered a calm cove sheltered from the swell.  I needed a spot where I could exit safely and haul the boat and all my kit above the high water line and then climb onto the island to seek some shelter.

After some deliberation I picked a spot committed and rapidly exited the boat emptied the hatches and safely moved the boat over the rocks to a safe location.  My urgency now led me to grab my phone and scale the rocks to high ground where I was sure that in sight of land I would get phone reception.   I did and the call to Andree was a great relief and news quickly went around to let everybody know that I was safe and well on dry land, at this point I didn’t fully explain I was on a tiny Island with only a lighthouse and 1,000’s of seagulls for company.  I also informed Malin Head Coast Guard that I was ashore at this point and thanked them for their assistance.

It was now after midnight and time to make camp or at least find a spot to lay my head.  The lighthouse looked promising so I grabbed my sleeping bag and bivvy bag and made my way across the rocks, the gulls were not impressed.  It took almost 30 minutes to clamber across the slippery rocks to find the lighthouse and outbuildings were all securely locked and I would be outside for the night.   I made my way back towards the boats looking for a suitable bivvy site, I located a perfect spot and as my eyelids grew heavy I crawled into my bivvy bag under a starry sky with a tired, tired body and mind.  Tomorrow I would deal with getting to Donegal.